November 4, 2016 will forever be etched in my memory as one of the best days of my life. On this day, 7 years of patience and perseverance paid off from 23 yards away, 17’ off the ground, through shaking hands and a heart pounding in nervous expectation!

To give you the back story, I began hunting in 2010, though only briefly that fall as we experienced 2 deaths in our families in October which left us completely spent emotionally, physically, and without much time to hunt.  My husband Peter and I had just taken up hunting as a new hobby to learn and to enjoy time together, and it has turned into more than either of us ever could’ve imagined. God has blessed this endeavor immensely and in so many ways outside the deer stands.

After beginning to hunt in 2010, I spent many seasons enjoying the squirrels, blue jays, doe and fawn, and only once in 7 years did I see a buck approach my stand, though not within shooting range.

The afternoon of Friday, November 4, 2016 we arrived at our cabin earlier than usual, but much later than we typically ever go out hunting. I wasn’t planning to hunt at all as we were driving up, and had my husband not gone out himself, I never would have gone. I decided it was a nice day and I might as well give it a shot. 🙂 I took my de-scenting shower and just threw my clothes and hat on without brushing my wet hair.  It was 4:00 PM when I headed out to the stand, with a 5:38 sunset time.

While I sat, I maintained as little movement as possible, having learned through the years that deer may be watching from a distance and you have no idea. By 4:45 I decided to hold my bow upright on my thigh, arrow nocked, wrist release attached, just to be ready and to minimize movement should I have the opportunity to draw.

Sunset came and went, and I knew my time to stop hunting was drawing near. All of a sudden I saw several deer emerge from the woods and into our yard, and then they made their way toward the food plot I was overlooking. I thought I might’ve seen a spike among them, which actually excited me and I would’ve shot, but they turned out to be all does. Oh well, I figured, at least I was seeing some wildlife and something to enjoy watching for the last few minutes of legal hunting time.

The does were there for a matter of minutes, when I lifted up a prayer to God about a buck, and within 30 seconds I saw the monster 10-pointer (which I didn’t know for sure at the time, just knew he was big and had a mature rack of at least 8!) strut out of the same spot in the woods and make his way back toward the does. He walked casually, not a care in the world, with just one thing on his mind, holding his head confidently and not even giving a notice to his blond-haired nemesis 17’ off the ground. The second he reached a spot that was clear beyond a branch for me to shoot, I was looking through the peep sight and feeling like I couldn’t see anything! I’m sure nerves had nothing to do with it! 🙂 The motion light in our yard had gone off from the does, because it was dusk, and the glare was messing with my vision somewhat. I got myself settled and into focus through the peep and then I saw my level bubble was off to the right. I frantically made subtle adjustments to no avail, panicking in my mind that I couldn’t figure out which way to tilt the bow to level it.  I finally (all of 3-4 seconds) got it leveled, I could see through the peep, and I maximized my draw a half inch more as I heard my husband’s coaching in my head that I need to be quick in the moment and not wait as long as I do when target practicing. I ensured I was well behind the buck’s shoulder, aimed slightly higher to account for the distance that I knew was further than the familiar 15’ target and what my bow was set at, overall aimed as best I could in this rushed, adrenaline-filled moment. I released with another prayer for accuracy and not injury to this beautiful animal. In the moment this felt like an eternity preparing to shoot, but I figured out later that it was about 20 seconds total from the time the buck emerged from the woods until I shot, and I made it within 2 minutes of legal hunting time!

He jumped, that famous whitetail flew up, the does scattered, he began running straight forward and immediately jogged back to head into the woods from where he came.  After setting down my bow, I immediately took out my phone and, with a full body shake going on, attempted to text something coherent to my husband that said “I just shot!!!!!!!!!” followed by “8-pointer” then “I’m shaking to death” and “Oh, I hope I got him” followed by “Dying!!!!” I told him “I didn’t hear the running for very long, so I think he’s hit!”

I descended my perch in the birch and headed to the cabin to bring my stuff in, get a flashlight, and get some gloves on my freezing bare hands (discovered my gloves were in my pocket the whole time). I went back to look at the site of the shot to see if my arrow was there, holding my breath that this one amazing opportunity had not slipped through my hands. No sight of the arrow! By then Peter arrived and we began looking for the blood trail.  Words cannot describe the elation we both felt when we saw that first, huge, crimson drop on a dry leaf. Peter assured me that it was a good bleed and I got him!  We started the adventure of tracking each blood spot, our hearts beating harder with anticipation as we made our way through the woods only a total of 94 yards until we beheld the sight of my majestic 10-pointer on the ground.  We were like kids on Christmas morning, jumping in excitement. Three years of hard work on our land had culminated in this moment, the crowning achievement of Peter’s fervent focus on developing our land more and more each year to bring deer in.

We dragged big boy a few more yards to our cousin’s clearing on his land and began preparations for the “fun” part of gutting.  Peter left me alone with my deer 4 times, as he ran back to get gutting gloves, the UTV, phone battery chargers, and then to go share the news with a neighbor.  I did not mind the solitude under the stars alone with my first deer. The most prevalent phrase circling my mind was “Thank you” a hundred times to the Lord. I took a moment to kneel before my buck and thank God for the amazing privilege and opportunity of taking this trophy animal’s life, which would provide meat for us as well as the fulfillment and satisfaction of many years of patient hunting. It was a special moment to reflect on Genesis 1 that gives us clear evidence that God made us to rule over the animals, and I can’t thank Him enough for the opportunity to grow in skill, in patience, and ultimately this victory in a sport that has done more for our marriage than anything else. 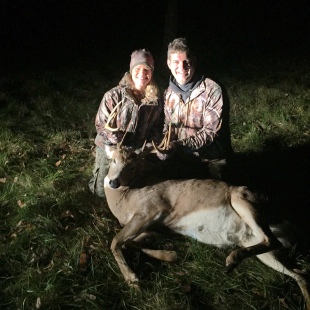 After taking tons of pictures, we (and I use that term loosely) began the gutting process on our own, but our new neighbor we’d only met 2 times came over with his wife, whom we were just meeting for the first time.  After struggling with a dull knife, the neighbors, Jared and Luisa,  offered their  extremely sharp knife to get the job done with ease. Jared guided us through the process and we both learned a ton. It was Peter’s first buck he’d ever gutted, featuring a few more nuances to navigate than a doe. 🙂 The guys loaded up my deer on the back of our 4-wheeler, a struggle to even lift him at that point, and we continued back to the cabin to hang him in the shed. I was not going to lose this prize animal to a ravenous predator overnight!

Bracing up our center beam with 2x4s on a bucket and a table saw, we supported the shed’s beam so this beast of an animal wouldn’t pull the whole thing down!  By the time we got in the cabin it had been a 3-hour process, from tracking to pictures to gutting to loading and hauling. What an unforgettable night!!!!

I slept less than 2 hours that night and I relished all the comments and likes on Facebook from my big announcement post. It’s certainly exciting to get the buck, but to savor everyone’s congratulatory comments and support made it all the sweeter.  I’d been keeping a picture on my phone of my dad’s first buck where I’m “helping” him hold it up.  I was about 3 years old at the time.  Amidst my insomnia, I created a side-by-side collage of that 1979 picture and the fresh photo from a few hours earlier of me holding up my own buck. I updated it with a daylight picture as shown below. A poignant memento to be sure. 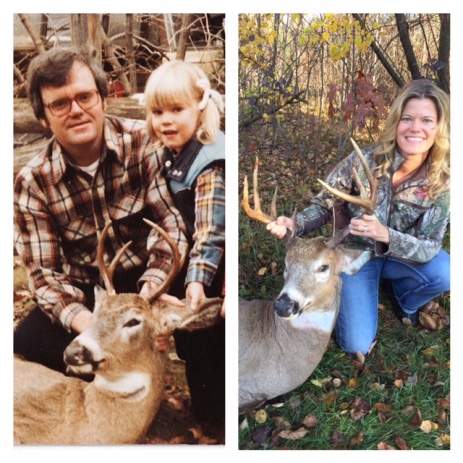 We took my deer into Pelkins in Crivitz for processing early Saturday morning, as it was going to be an unseasonably warm 65 degree day! Peter was such a good sport in letting me “run the show” by obliging my request to hook up the trailer before daylight, and get the deer down and onto the trailer mostly himself. He humored me by letting me wrap the body cavity with tarp to avoid getting road rash in my venison!

Once we arrived at Pelkins we were the 2nd people in line at the wild game door.  The guy ahead of us had a little spike, and then 3 sets of men that followed all had smaller bucks as well. Each one congratulated Pete on my deer, but he quickly pointed my way to give credit where it was due. 🙂 Having your husband equally excited about your deer made this experience SO fun.  It was truly our deer.

I now await my trophy deer head to be mounted, unknown price being irrelevant, as this deer is officially the biggest deer anyone has ever gotten in my extended family as well as Peter’s in 60 years of hunting this area!! This was an absolute gift straight from the hand of God. There is no other way to explain the textbook, perfect scenario of the area’s largest buck we’d ever seen, coming out while yet daylight, and standing broadside for a perfect shot opportunity for me. Unbelievable. Praise God from Whom all blessings flow! 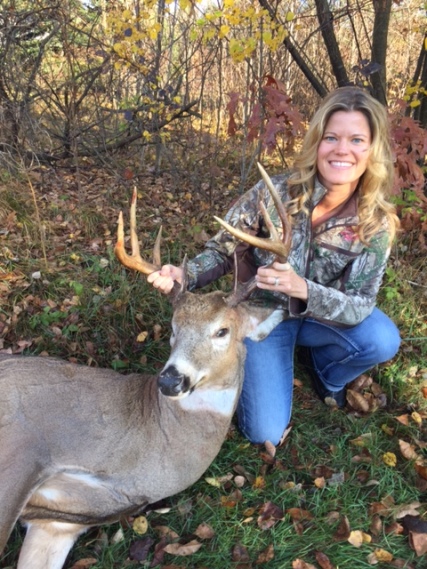