This weekend marks 5 years that I walked away from drinking socially, and it’s one of the best decisions I’ve ever made.  Many people seem confused when you state that you quit drinking, but not at all because of alcoholism.  When people ask me why I don’t drink, the answer is short but lengthy. Plain and simple, “Because God told me to.”

I vividly recall the red wine-stained vomit all over the bathroom, including the image seared in my mind of of that crimson mark on my white sock.  It was all so bizarre; I’d never made such a mess before in my life!  There was something different about this situation and I began to feel the conviction of the Holy Spirit saying “You’re done.”   Strangely enough, my husband also got sick, which so rarely ever happened, so we both felt a bigger meaning being impressed on us.

The next day I said I think I’m done drinking for good, and my husband confirmed the same thought for himself.  I soon after found Proverbs 23:29-33 as another confirmation, right down to the irony of the “taste mixed wine” part!

“29 Who has woe? Who has sorrow?  Who has contentions?   Who has complaining? Who has wounds without cause?  Who has redness of eyes? 30 Those who linger long over wine, Those who go to taste mixed wine. 31 Do not look on the wine when it is red, When it sparkles in the cup, When it goes down smoothly; 32 At the last it bites like a serpent and stings like a viper. 33 Your eyes will see strange things and your mind will utter perverse things.”     Proverbs 23:29-33

Not always one to grasp a lesson (or maybe it’s to listen!) in one message, God confirmed this about-face from drinking over the next few days.

I clearly remember driving on Highway 41 in Green Bay, WI between Mason St. and Lombardi Ave. exits and flipping through radio stations when the familiar voice of Priscilla Shirer caught my ear, so I stopped. I had no idea what the program was about, but the very second I stopped at the sound of her voice she said, “If you’re not who you used to be, then you have no business going where you used to go.”  BOOM, another 2×4 of truth I’d been seeking, which is confirmed in 2 Corinthians 5:17.

God continued to stir in my heart and confirm that the overarching life change I was currently moving toward with transparency and authenticity in relationships and in all of life would most definitely include leaving drinking behind. I wasn’t who I used to be, thanks be to God, and drinking was definitely a part of who I used to be at that point, from college-age on. God was calling me to die to self in one more way, and I had encountered a Romans 12:1-2 fork in the road .  An uncompromising life, which I want, may call for uncommon standards, of which I am willing to sacrifice, and becoming a non-drinker in the heaviest-drinking state in the country would certainly set me apart as uncommon in the culture.

The Bible talks over and over about followers of Christ being sanctified.  This word comes from the Greek word hagiazo, which means to make holy, to set apart.  In 1 Corinthians 6:9 we read a list of unrighteous lifestyles that will not inherit the kingdom of God. But for the grace of God I’d still be chained in several of those activities. Before despair can take root, if we continue reading we encounter the beautiful, powerful, life-saving words that assure us, “Such were some of you; but you were washed, but you were sanctified, but you were justified in the name of the Lord Jesus Christ and in the Spirit of our God.”

If we, then, as believers are called to be set apart, how are we living that out if we’re blending in with the world? I was challenged by this fact, and turned 100% away from drinking and have never looked back. Though it’s only one branch of many yet to be pruned by the Master Gardener’s shears, quitting drinking has been one of the best decisions I’ve ever made.  There is no effect from any substance that can mimic the true peace of God that comes with obedience.

Before there is any misunderstanding, please let me say that this was a clear command for me.  The Bible does not condemn drinking for most people but absolutely does condemn drunkenness. To walk away from ever drinking again is a personal conviction that I clearly heard God command in my life alone.

That said, when making the consideration of altering our minds with any substance,we ought to consider 1 Corinthians 10:23:

In all of life’s choices, we must diligently examine our motives and our masters, asking who are we living for?  2 Corinthians 5: 14-15 instructs us that the love of Christ controls us and He died for all, so that they who live might no longer live for themselves, but for Him who died and rose again on their behalf.  Likewise in 1 Corinthians 6:20, “For you have been bought with a price: therefore glorify God in your body.”

To move from a “bottom’s up” lifestyle to this now more truly authentic hands up lifestyle there was most certainly a cost. It’s cost me a reduction in regrets, it’s cost me feeling hungover, it’s cost me lost opportunities for broken trust, it’s cost me identity with the world.  Obviously there is not one cost in that list that I would want to reclaim.  The facade of transparency and pseudo-intimacy that alcohol provided me was not authentic nor affirming of Christ’s character in my life.  To truly seek real relationships is to vulnerably share your heart and go after others’ hearts through honest, meaningful conversation.  I’m grateful for this lesson and God’s patience in driving it home for me.  To Him be the glory! 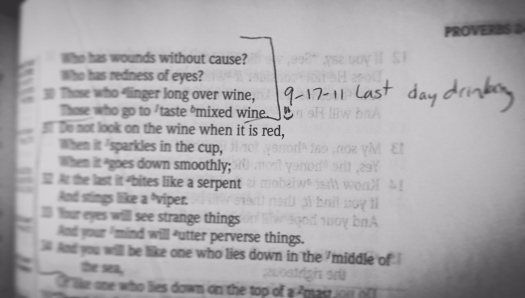